In the wide horizontals – the curves of the channel, the waves of estuarine sand, the flights of birds, the ranges of Lake District hills – the Arnside railway viaduct is a comb set on its teeth. Before the railway came in 1867, the way to Lancashire across the Sands – until 1974 Lancashire embraced the Bay, down to Barrow-in-Furness, up beyond Coniston – was across Lancaster Sands. Wordsworth walked it. Ruskin took the train. The right of way across the Sands is marked on OS maps with ‘Warning – seek local guidance’. 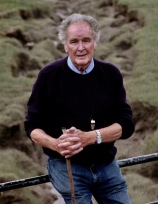 The guidance is a guide, paid £15 a year by the crown, since 1963 Cedric Robinson, ‘sand pilot’, ‘man of the sands’, who has fished the Bay all his life. But never from a boat – cockling with jumbo board and rake, fishing with fixed nets to catch the tides, shrimping with horse and cart and then tractor. There’s no longer a full-time living, and it’s left to part-timers, and chancers like the gang-masters who kept the Chinese cockle pickers too late on the Sands in 2004, and 21 drowned.

There are many accounts of the caravanserais crossing the ‘wet Sahara’ – “oxen, sheep, horsemen, carriers, carts, chaises, gigs, all in close succession, instead of the dromedaries and turbaned inhabitants of the East”. And deaths are recorded from earliest times – being caught in the incoming tide, “swifter than a galloping horse”, or wheels trapped in quicksand, carriages overturned.

And then came the railway. And then a few recreational crossings. I crossed in the early 1950s, it must have been with William Burrow (“1950–1963. Died in office”.) A Sunday school outing? Not many in the party, anyway. Now there are 18 crossings a year. And today I and the other 499 sponsored walkers are wearing “Friends of The Lake District” tee shirts as we head down the coast from Arnside. It begins to rain.

Just short of where the Chinese cocklers died (the last skull was found by a fisherman who thought it was a pair of false teeth grinning up at him from the sand) we turn west and head out into the Bay. At the Keer crossing I take off my trainers – walking across ridged sand through ankle-deep tepid gently-flowing salt water is perfect foot therapy, and my feet are tingling at the other side.

Then a long walk across featureless sand. 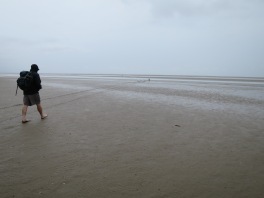 Surprisingly large ups and downs, like wet dunes; in the dips, the horizon disappears. How easy to go astray without landmarks, Arnside Knot, Heysham Power Station, the gap that is the Irish Sea, Barrow, Coniston Old Man, Grange-over-Sands promenade, bleached and softened by the rain.
Settle into the walk. The walkers. The silent, erect woman, remembering the husband she did this walk with forty years ago. The father and son, bonding. The two boys, eleven, best friends, dashing this way and that, chasing, hiding, splashing, laughing, giddy with the water and the vast space, the best day of their lives. Remembering that crossing so many years ago, the guide showing us how to tread for fluke, ‘shoes off, walk carefully through the water, feel the movement under your foot, press firmly, bend, hand under, thumb on top , there – a fish for your tea!’ Holds out the wriggling flat fish, I pull back, he drops it in his bag with a smile. And on a wide expanse of dry-looking sand, with rhythmic pressings of his feet setting the sand in motion, like a trampoline, so that soon it’s undulating, moving in waves, under my feet, making me giddy, I can still feel it. ‘Quicksand,’ he says, ‘break the surface and you’ll sink, straight down. You won’t be swallowed up, like in the films, but you’ll be stuck – it sets like concrete around you, so you drown in the next tide. So tread carefully.’ How I trod carefully!

The rain is steady. I’m wet through. The wind has come up. I’m cold. The sands are wide and empty. The shore is far away. We are shepherded between a tractor and a quad bike. But the walking is easy, and this is good, I’m crossing the Sands again after 65 years.

The main river, the Kent. A hundred yards wide, thigh deep, pushing through the thick water, against the strong side current, a sense, in the long, splashing crossing, of the scale and power of this alien environment, the grandeur and the jeopardy. The stream of people crossing is biblical. 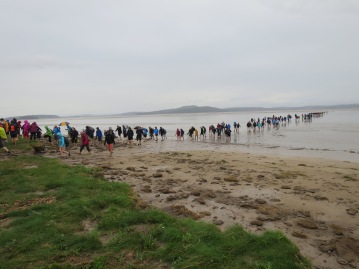 Surprisingly quickly we’re splashing across the last channel and climbing up to the station at Kent’s Bank. Ced’s daughter as always is waiting, umbrella in hand for him to sign books under. As he signs, I thank him for Sand Pilot of Morecambe Bay say how much I enjoyed it, a gentle ‘thank you’, warm smile. Train, bike, home, dump everything in the bath, dry clothes, crumpets and tea. It won’t be my last crossing of the Sands.

3 thoughts on “Letter from Lancaster 17”