The Lune through Lancaster (1): The Lune Aqueduct

Built to power a corn mill, the weir created a three mile lake. William Bradshaw objected to the building of the aqueduct, fearing it would affect his salmon and trout fishing. But built it was. And on a grand scale.

The canal heading for Kendal had followed the 72ft contour from Preston; it is the longest lock-free canal in UK. It was built to generous dimensions, often 30 feet wide, taking barges of 14ft beam, as against the 7ft narrow boats of many canals. The plan was to cross the Ribble at Preston and run south to the Leeds – Liverpool canal, connecting Lancaster to the port, commercial and industrial South Lancashire, the Wigan coalfield, and the national network. There would be aqueducts over the Lune and the Ribble. The Lune aqueduct was built 1794 – 96. It was a disaster.

What? Grade 1 listed, “the finest and largest masonry aqueduct in UK”, “the outstanding aqueduct in NW England”, “John Rennie’s best work”, a disaster?

Why the cost overrun, when Skerton Bridge, the same length, the same five stone arches, cost £14,000, and the contemporary Poncysylite aqueduct, half as long again and twice as high, was built for £47,000?

The first mistake had been strategic – to choose to push the canal towards Kendal and risk running out of money instead of linking across the Ribble to the southern section then under construction, which would have generated income. Perhaps the worthies of Lancaster, used to their privileged eighteenth-century life of twice-yearly assizes and sea-born wealth, were not ready to throw in their lot with the industrial toil of south Lancashire.

The second was perhaps vanity – 9 of the 11 on the canal committee were from Lancaster, and the prospect of a fine prestige project, within walking distance of Lancaster – along “Ladies’ Walk”, no less – to match the great buildings of the town’s prosperity, was too much to resist. It is said that Rennie proposed brick. Such an idea! Having settled on Rennie’s “decidedly monumental” (Pevsner) design, building began.

What then went wrong? Although a noted engineer, this was Rennie’s first bridge, and, being cautious, he overbuilt. And perhaps the weir was the key. While Harrison had low tides and a daily near-dry riverbed to access the site, Rennie was building in a lake. It needed constant pumping with inefficient steam engines to drain the coffer dams. And rushing to be prepared for winter floods, work went on round the clock. The aqueduct completed, the money gone, work on the canal stopped. But not before a plaque was carved on the aqueduct, “To Public Prosperity”. As a report in 1819 stated, too much had been wasted “in ornamenting the town of Lancaster with a grand aqueduct upon which the water has lain stagnant for over 20 years”.

It meant the Ribble aqueduct was never built. Instead an inefficient tramway over the river was cobbled together. It soon fell out of use, and the canal south of Preston incorporated into the Leeds – Liverpool. Instead of a direct connection to the growing economies of south Lancashire to compensate for the town’s decline as the maritime trade and enterprising sons moved to Liverpool [Letter 15], it was left a ribbon lake, the “Black and White”, carrying coal north, and limestone south. Lancaster stagnated for 50 years. Until an entrepreneurial genius was born in the town. [Subject of a future Letter.]

For John Rennie it was career-making, and he became a trusted bridge builder. But his bridges carried a Lancaster imprint. Having studied Skerton Bridge, he adopted Harrison’s flat roadway and semi-elliptical arches on Kelso Bridge, Waterloo Bridge, and London Bridge. In his Waterloo Bridge, described as “the finest large masonry bridge ever built”, “the noblest bridge in the world”, and in London Bridge (now crossing a canal in a retirement village in Arizona), it is impossible not to see echoes, even images, of Harrison’s masterpiece. 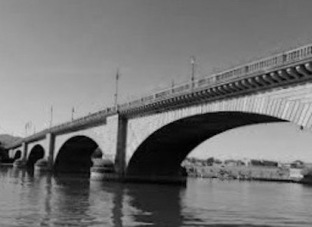