Close to Horizon Line Chamber [Letter 11] is a grave in a rabbit warren in unconsecrated ground under a stone slab with a bronze plate engraved: 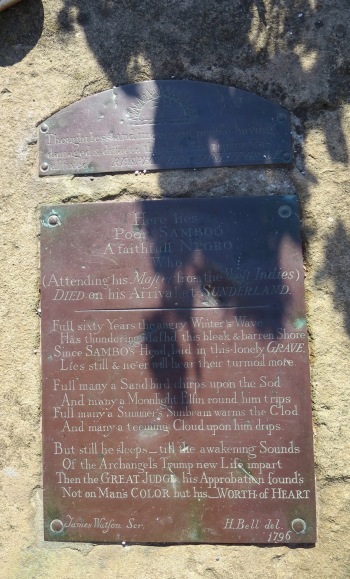 Full sixty years the angry Winter’s Wave
Has thundering dash’d this bleak and barren Shore
Since SAMBO’s Head, laid in this lonely GRAVE,
Lies still and ne’er will hear the turmoil more.

Full many a Sand bird chirps upon the Sod
And many a Moonlight Elfin round him trips
Full many a teeming Cloud upon him drips
But still he sleeps – till the awakening Sounds
Of the Archangel’s Trump new Life impart
Then the GREAT JUDGE his approbation sounds
Not on a Man’s COLOR but his – WORTH OF HEART.
James Watson 1796

In those sixty years Lancaster changed: in 1736, a quiet country town, enlivened a little twice a year by the County Assizes and the public hangings that followed, dependant on a thrice-weekly market to sustain it as a local centre. In 1796, a thriving seaport of international trade, with all the ancillary businesses, including ship-building, a thriving furniture-making industry, and its own banks. A quiet medieval town of wood and thatch had become a busy Georgian town of stone and slate, with a developing retail trade, wealthy merchants, and a busy social season of horse-racing, music-making and theatrical entertainments. Everything architecturally fine in the townscape of Lancaster was built in that period: Skerton Bridge, the Aqueduct, Customs House, St George’s Quay, Music Room, Assembly Room, Town Hall, the new developments of Queens Square, Dalton Square, Castle Park, etc, etc.
And all of it based on, derived from, paid for by, slavery [Letter 25].

Twenty per cent of Lancaster sailings were slaving voyages: in Lancaster ships, 35,000 captives left West Africa; 29,000 slaves arrived in the West Indies. Fifty per cent of the town’s trade was with the West Indies, with additional trade to the slave states of North America – the first bale of American cotton to arrive in England is said to have been landed at Sunderland Point. There was also Baltic trade, and coastal trade including with Ireland, but the West Indies trade dominated, and was the most profitable. Lancaster merchants owned plantations – including the brother of James Watson, the poet of Sambo’s epitaph. Gillows imported Honduras mahogany, and transformed it into fine furniture, to ship back to the plantation owners, and to sell to the Lancaster elite. As Dickens puts it, “Lancaster is a pleasant place, dropped in the middle of a charming landscape, a place with a fine fragment of a castle, a place of lovely walks, a place possessing staid old houses richly fitted with old Honduras mahogany, which has grown so dark with time that it seems to have got something of a retrospective mirror quality into itself and to show the visitor, in the depth of its grain, through all its polish, the hue of the wretched slaves who groaned long ago under the old Lancaster merchants …”

Watson was writing, in 1796, in the indignation of the anti-slavery movement. But writing with patronising sentimentality, at a time when there were dozens of ‘Blacks’ and ‘Negroes’ in the town, working as servants. In theory they were free, but over 800 advertisements for absconded ‘Negroes’ have been found in British newspapers of the time. One offered 5 guineas for the return of his ‘BLACK SLAVE, called CAESAR’. Another notes that the runaway is wearing a brass collar inscribed, ‘Gustavus Brown … his Negro’. Others were advertised as branded with their master’s initials. A sentimental gloss on the Sunderland story has it that ‘Sambo’ (not a personal name but generic, as my generation would refer to a ‘Paddy’) had pined away while waiting for his master. Like Greyfriars Bobby.

And Dickens was writing in the satisfaction of post-Abolition times.

And then slavery was elided from history. In my thesis on Lancaster written in 1966 I wrote, “1700 – 1790. As with Bristol this was a period of great prosperity based on trade with the West Indies.” It was only in the 1980s that it began to be written about. It is now acknowledged. But, with so much I find fine in the town derived from it, I have, living here, to live with a cognitive dissonance.

Note: Dickens, in The Lazy Tour of Two Idle Apprentices. The other ‘idle apprentice’ was Wilkie Collins. Dickens liked the King’s Arms Hotel, where they stayed, and corresponded with the proprietor for many years.