“Heysham has one of only three possible examples of pre-Roman labyrinths in the British Isles”, wrote Dr George Nash, Bristol University archaeologist, in 2008.

An ancient labyrinth? At Heysham? I’m interested. I like labyrinths. I’ve written about a labyrinth in Crete1, a labyrinth in Amiens cathedral2. A friend made a turf labyrinth in Dorset that we walked.
A labyrinth is not a maze. There are many ways through a maze, you can get lost in it: it is a puzzle to solve. There is only one way through a labyrinth; it combines circle and spiral in a path that meanders but is purposeful: it is a path to follow. The labyrinth in Chartres cathedral is called the Road to Jerusalem, the Road to Paradise. As a meditative practice it is the road to the self. As a religious object it is the portal to another realm.

From their origin in Crete (the Theseus and minotaur story is accepted to be a Greek distortion of a Minoan labyrinth ceremony conducted by a bull-masked priest), they spread along the Bronze Age trading routes the Greeks took in search of tin, to Iberia and then to the British Isles. The other British labyrinth is at Tintagel, close to Cornish tin mines. And Heysham is on old Irish Sea trade routes – St Patrick is said to have visited, and the hogback stone in the church [Letter 10] is thought to be the grave marker of a Viking trader.

The Heysham labyrinth was discovered in 1996 by a local reporter, and his photograph printed in the Morecambe Visitor. The newspaper reported, “excited historians have been scrambling for their reference books following the discovery of a mysterious rock carving on the beach by the village.” One expert thought it pre-Historic. Another pronounced it Victorian graffiti.
Working from the photograph, Nash concluded that the labyrinth had been pecked – rather than carved – consistent with pre-Historic petroglyphs. But when he visited in 2008, he found it smoothed and eroded. It was fading away. Time for me to find it.

It isn’t easy to find. I have a couple of photographs of the location, but there are acres of sandstone ledges and pavements on the headland, and I am looking for a faint carving eight inches across.

On my first visit, I don’t find it.
But I do find this boat engraved into a rock face.

On my second I find it. 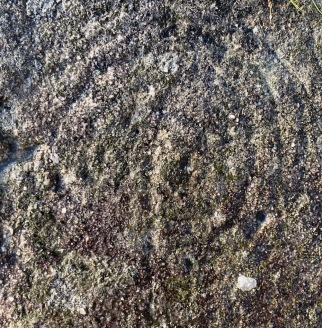 It is on a flat pavement of rock, at the level of the high tide. It would be submerged by the highest tides. It is close to the engraved boat.

And yet, even after I’ve found it, its presence is fugitive. The low angle of the setting sun helps, but even so, it is only in my photograph that I’m sure it is there. I bring a friend the next day, and we cannot find it. The day after, with another friend, we walk straight to it.

What to do with this story? Perhaps it is from pre-History, a petroglyph having a forgotten significance, long covered but revealed by an exceptional storm, and we have from 1996 to the moment it finally disappears to resolve our relationship with it? But how did the photographer come upon it when he wasn’t looking for it?
Maybe it is a hoax, like crop circles, created as bait for New Agers to fit into their theories? And yet it was so painstakingly and accurately cut.
Perhaps it was created by a present-day group as their talisman, a group I should be seeking out …?
One theory places it in the late nineteenth century, a time of revived mysticism and belief in fairy magic; there are several graffiti close by, mostly carved names, one dated 1896. And there used to be, below in Half Moon Bay, a Fairy Chapel and a Fairy Bridge, gone now – there are old postcards of them. I have come to realise that there is so much about Heysham. I tried to encompass it in short story, and failed. It needs a full novel to include it all. In the meantime, I return to the boy in Letter 10.

‘On the day Ship arrived, he saw the new look on her face, and that the identical figures were facing away from each other, seeing different worlds. He realised that she would go far, naming, and doing great things. While he would stay, come again and again to experience the sea and sky cupped in the steel hull, and listen for what the wave says …

‘The day she leaves, as he wanders the shore, unmoored, he finds, running his hand absently along the cliff face, the engraved boat. He sits down, comforted by the presence of the boat which represents, surely, the girl. It is a languid day, the tide far out. His finger idly traces the rock beside him. He feels a curve. And another curve. Looking down, revealed by the setting sun, he sees the labyrinth. All the times they had clambered over, sat on, swam from this ledge, together, without seeing the boat, the labyrinth …
This day, and from now on, the boat represents the girl. The labyrinth is his.

‘He studies the labyrinth, each curve, in minutest detail. He wets his finger, touches the labyrinth, tastes the sandstone, the salt. He follows the curves with his fingertip, the involutions and evolutions, in to the centre, out to the edge, back in. And sometimes, at the centre, through. Eyes closed, his fingertip reads the story, like braille. So many stories. Eyes closed, the walls of the groove rise high on either side and he is the needle on a record, playing its song. So many songs.
‘On sunny days at low tide he sits beside it and looks out over the vast tawny pelt of the Bay, smooth as chamois, and inscribes words, makes patterns, creates worlds upon the vellum.
On moonless nights at high tide he stands over it, the dark water lapping at the ledge, aware of the limitless ocean, is drawn to enter and lose himself in its waters, instead draws the ocean into himself, encompasses it.